48 artists, 48 years of freedom is the name of the collective artwork that will be symbolically created in the maat Gardens on 10 June 2022, Day of Portugal.

Also in the Gardens, the artist Xana contributes to the celebration with a new sculpture entitled LIBER/ estruturas para construir.

On the same day, the museum will be presenting a programme conceived by the Festival Iminente which brings together different expressions of urban culture, with breaking battles and concerts by Juana na rap and PRÉTU Xullaji.

Breaking battles
A collective of breakers of various nationalities and crews that come together to strengthen breaking in Lisbon. In group or individually, they regularly participate and promote social projects and events for the community. They also regularly take part in national and international battles and festivals. Most of the members have an active role in youth training and participation in advertising campaigns, and also have a performing career, as part of companies, dance schools, and cultural associations.

Juana na rap is a rapper representing Monte da Caparica in the south bank of the Tagus. She started making her first freestyles and writing lyrics while still at school. In 2013, she released her first album, Juana na Rap, and the second, Tcheu Barreras, in 2016, both recorded with Primero G, and has been releasing loose songs, as Atividadi, in 2021. Her songs relate the reality and experience of the neighbourhood.

PRÉTU Xullaji (formerly Chullage) is a rapper known for his lyricism and political intervention. His lyrics express his thoughts on decolonisation, Pan-Africanism, afro-futurism, and love, among other themes.

12.00-13.30
Guided tour to “48 artists, 48 years of freedom” and to the exhibition “Interferences – Emergent Urban Cultures”
With Jorge Catarino

15.00-16.30
Guided tour to “48 artists, 48 years of freedom” and to the exhibition “Interferences – Emergent Urban Cultures”
With Jorge Catarino

The reinterpretation of this mural, 24 meters long and 3 meters high, has the participation of 48 artists: some of them participated in the creation of the original panel and the others are artists who stood out in the art scene during the last 48 years of democracy in Portugal, an anniversary celebrated this year, and some of them are part of the exhibition Interferences: Emerging Urban Cultures, on view at maat. 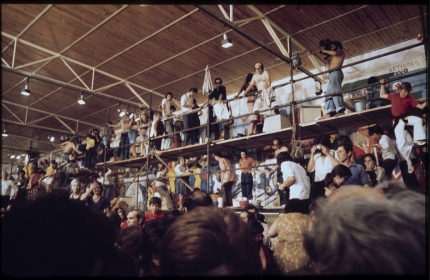