The EDP Foundation commissioned the artist Pedro Cabrita Reis to produce the sculpture Central Tejo, which was completed in June 2018. A couple of possible locations were presented to him, but Cabrita Reis already knew exactly where he wanted to install the piece: at a pier on the Tejo in front of the old power station, where the barges which supplied coal to the energy factory would moor before the latter was turned into a museum. “It’s a historical place. Any artwork created there would immediately become part of the city’s history.”

To achieve the delicate balance between monumentality and lightness, Cabrita Reis used two of his favourite materials — aluminum tubes and fluorescent lights. A common denominator of most of his work since the mid 2000s, aluminium and neon lights are the basis of some of his most well-known pieces, such as the installation A Remote Whisper, presented at the Venice Biennale in 2013. “I work with everyday materials, which are easily recognisable”, he explains. “People see simple aluminum tubes and fluorescent lights which are identical to the ones they have at home and are disarmed.” The configuration of the piece also had to be simple. “Simplicity,” the artist stresses, “is always the objective”.

Cabrita Reis (b. 1956) envisaged two interconnected towers, free of superfluous elements, which merge with the landscape and reflect the light of the river while also emanating their own light — like luminous skeletons of two matching tower blocks. For him, the work evokes a “strange machine for producing light” and recalls the former purpose of the Tejo Power Station.

Cabrita Reis considers his Central Tejo to be an integral part of the fabric of the bank of the Tejo. “Of course, the sculpture was made for Lisbon and the people of Lisbon”, he says. “But it was also made for the river.”

Lawrence Weiner — Placed on Either Side of the Light, 1999
permanent installations 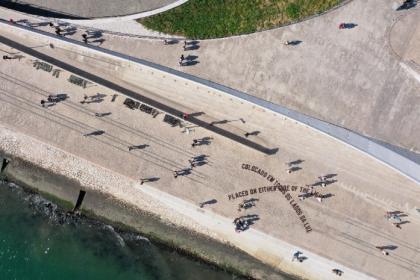