48 artists, 48 years of freedom is the name of the artwork that will be symbolically created on 10 June 2022 in the maat Gardens, a collective mural intervention that reinterprets the work entitled Painel do Mercado do Povo [The People's Market Panel] created by the Movimento Democrático dos Artistas Plásticos [Plastic Artists for Democracy Movement] on 10 June 1974, in Belém.

The reinterpretation of this mural, 24 meters long and 3 meters wide, has the participation of 48 artists: some of them participated in the creation of the original panel and the others are artists who stood out in the art scene during the last 48 years of democracy in Portugal, an anniversary celebrated this year, and some of them are part of the exhibition Interferences: Emerging Urban Cultures, on view at maat.

There will also be a number of street food stands from several Lisbon communities in the outdoor area. A musical programme designed by the Iminente Festival will also be available, bringing together several expressions of urban culture, including live performances of breaking and breaking battles and concerts by Juana na rap and PRÉTU Xullaji. 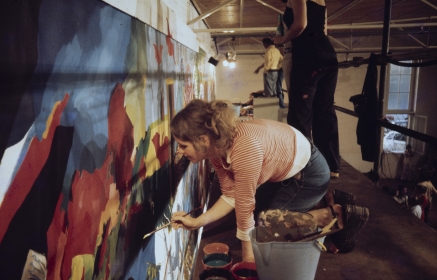 The 10 June Mural or the Passage to the Act
48 artists, 48 years of democracy
Become a member
Get the latest news from maat in your inbox Subscribe Newsletter