This monographic exhibition – DAY by Carsten Höller – brings together a vast array of works producing light and darkness, ranging from sculptures with lamps to projections and architecture dating from 1987, when Höller was working as a scientist, until today.

Almost twenty pieces, many especially recreated for this show, unfold across the entire museum in an arranged parcours that enters in dialogue with its unique spatial character of organic curvatures, narrowed thresholds and differently sized and lit volumes. Devoid of any support structure, nor using any of the museum’s inbuilt lighting system, the space is solely illuminated by the works themselves leading audiences through multi-sensorial experiences of altered perception.

Extending outside-in, the exhibition features Light Wall, erected outdoor. Close to the museum's entrance, it greets both visitors and passers-by with an array of light bulbs flickering at a mesmerising frequency of 7.8 Hz. Lisbon Dots, presented here for the very first time. Installed in the large oval room in the centre of the museum, is an interactive installation made of 20 spotlight projectors that follow visitors’ movements and allow them to play a game with each other. Thanks to a collaboration with Acute Art, the cutting-edge producer of augmented, virtual and mixed reality artworks, directed and curated by Daniel Birnbaum, the exhibition expands also into the digital dimension with a special app debuting in Lisbon.

Also presented here is the iconic work Two Roaming Beds (2015) – visitors will have the unique opportunity to spend a night inside the museum where everything on display can be experienced in privacy. The beds will move at random and leave a trace of the sleepers’ nightly roam in the form of a brightly coloured line on the floor, which will all add up over time to create a gigantic drawing.

A relevant public programme will include 7.8Hz Meditations taking place between December 2021 and February 2022 and curated by Mariana Pestana.

7.8 Hz Meditations is a set of performances and a vinyl publication that gathers contributions of contemporary thinkers and composers in the form of meditations. 7.8 Hz is the global electromagnetic resonance of the earth, produced by lightning activity in the upper atmosphere, and is also the human brainwave frequency in a relaxed, dreamy state. Launched in a time marked by a global climate crisis and a state of social isolation with deep psychological consequences, this performance-publication offers the public a sequence of textual and sound therapeutic compositions to remind them of their radical, ecological interdependency.

More details about the programme and information on how to participate to the meditations are going to be available in the In Time section of this website and on maat ext. (extended).

Carsten Höller was born in 1961, in Brussels, to German parents. After earning a degree in phytopathology with a specialisation in chemical ecology at Kiel University, Germany, from 1993 onwards he devoted himself exclusively to art. Höller applies his training as a scientist to his work as an artist, focusing particularly on the nature of human perceptions and relations. Notable works include Flying Machine (1996), an interactive installation in which viewers are strapped into a harness and hoisted through the air; Test Site (2006), a series of giant slides installed in Tate Modern’s Turbine Hall; and Upside-Down Goggles (2009–11), an ongoing participatory experiment with vision distortion through goggles. Revolving Hotel Room, which became a fully operational hotel room by night, was featured in the exhibition theanyspacewhatever at the Guggenheim Museum, New York (2008–09). In the artist's own words, “all these works, including the slides, are exploratory sculptures. They offer the possibility of unique inner experiences that can be used for the exploration of the self”. For Höller, the museum can be seen as a space for experimentation and for testing ideas and concepts that can eventually be enacted on a larger scale. Synchro System, referring to the synchronization between viewer and artwork, between human beings and “machine effects”, was conceived by Höller for Fondazione Prada, Milan (2000) and consisted in the realisation of a “village of possibility” composed of psychophysical stimuli and interactive tools. Other major solo exhibitions by Höller include 7,8 Hz, Le Consortium, Dijon (2004); Carrousel, Kunsthaus Bregenz, Austria (2008); Experience, New Museum, New York (2011); Doubt, Pirelli HangarBicocca, Milan (2016); and Sunday, Museo Tamayo, Mexico City (2019). Höller lives and works in Stockholm and Biriwa, Ghana. 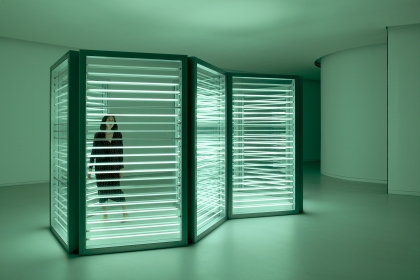 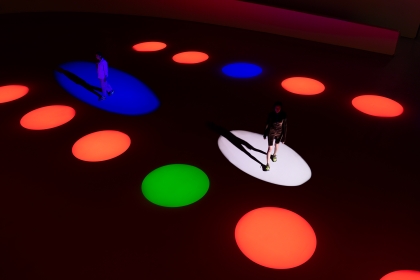 7.8 (Reduced Reality App)
A new and mobile work by Carsten Höller for DAY
Become a member
Get the latest news from maat in your inbox Subscribe Newsletter