With his seemingly inexhaustible well of references and resources, Gabriel Abrantes (b. 1984) is an unconventional artist who delights global audiences and challenges the traditional boundaries between the disciplines of cinema and contemporary art. Being more than a simple retrospective of his work, Programmed Melancholy proposes an experimental (and open) stage for visual encounters that guide the visitor through the unorthodox and seductive work of one of the most prolific authors today, revisiting different moments and phases of his career as a (somewhat romantic) attempt to integrate past, present and future.

Except for the room where the painting As Banhistas [The Bathers], 2020, is displayed, the exhibition is divided into six distinct environments, each inspired by one of the artist’s films. Produced between 2008 and 2019, these film works are based on complex narratives that combine a series of historical, social and political situations with a critical reflection on major themes of anthropology, modernity and identity.

Abrantes’ new paintings are populated by enigmatic and ambiguous characters, both cute and grotesque, hovering on a blue background resembling a deserted and gloomy landscape, evocative of a metaphysical space-time that transcends the physical materiality of the canvas. With images created using a range of computer animation software, they confirm Abrantes’ growing interest in the meeting point between 3D computer animation, artificial intelligence and art history, with a special focus on Western painting. In them, one can spot references to Paul Cézanne, Pablo Picasso or Ed Ruscha, but also to the votive figures of the Archaic Dynastic Period, to commedia dell'arte or the visual aesthetics of Disney and Pixar films, and to the famous American cartoons (Talkartoons) distributed by Paramount Pictures in the 1920s and 30s. Considering the relationship between cinema and painting and the concomitance between these two different practices — while acknowledging the successive interruptions and deviations of the latter, it is clear that the films’ imagery owes a lot to the painter’s source material — for example, the futuristic robot from Humores Artificiais (2017) is a clear reference to René Magritte’s iconic bells — and that, in the case of this new series of paintings, his inspiration also comes from animation movies and short films. 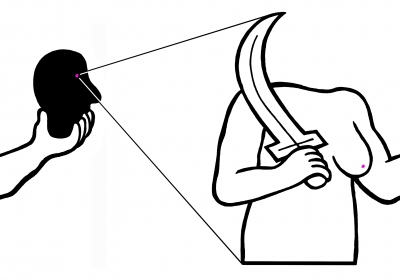